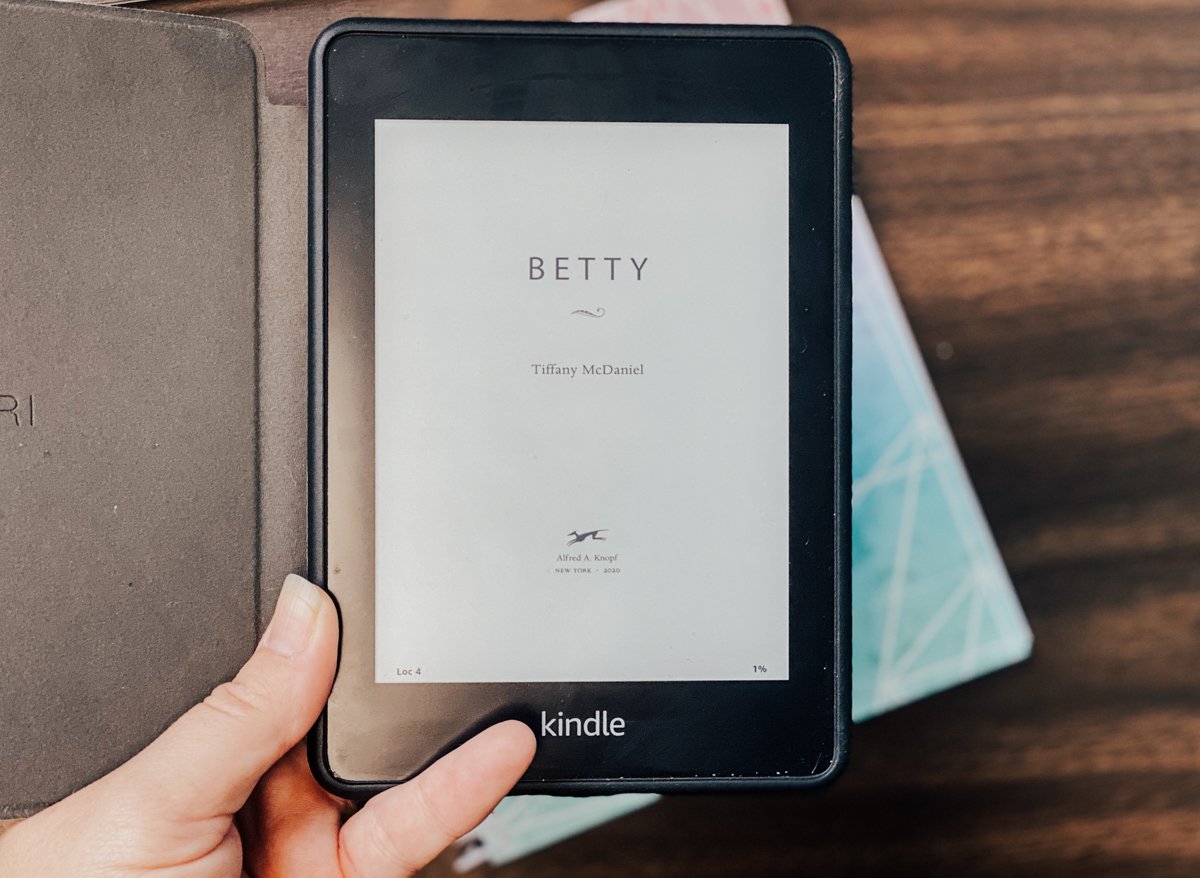 I received a copy of BETTY in exchange for my honest review from the author and NetGalley.
All opinions are, of course, my own.

Tiffany McDaniel is a novelist, poet, and visual artist born and raised in Ohio. She is the author of The Summer That Melted Everything and BETTY.

“A girl comes of age against the knife. She must learn to bear its blade. To be cut. To bleed. To scar over and still, somehow, be beautiful and with good enough knees to take the sponge to the kitchen floor every Saturday.”

A stunning, lyrical novel set in the rolling foothills of the Appalachians in which a young girl discovers stark truths that will haunt her for the rest of her life.

“A girl comes of age against the knife.”

So begins the story of Betty Carpenter. Born in a bathtub in 1954 to a Cherokee father and white mother, Betty is the sixth of eight siblings. The world they inhabit is one of poverty and violence–both from outside the family, and also, devastatingly, from within. The lush landscape, rich with birdsong, wild fruit, and blazing stars, becomes a kind of refuge for Betty, but when her family’s darkest secrets are brought to light, she has no choice but to reckon with the brutal history hiding in the hills, as well as the heart-wrenching cruelties and incredible characters she encounters in her rural town of Breathed, Ohio.

But despite the hardship she faces, Betty is resilient. Her curiosity about the natural world, her fierce love for her sisters, and her father’s brilliant stories are kindling for the fire of her own imagination, and in the face of all she bears witness to, Betty discovers an escape: she begins to write. She recounts the horrors of her family’s past and present with pen and paper and buries them deep in the dirt–moments that has stung her so deeply, she could not tell them, until now.

Inspired by the life of her own mother, Tiffany McDaniel sets out to free the past by telling this heartbreaking yet magical story–a remarkable novel that establishes her as one of the freshest and most important voices in American fiction.

Every so often a book comes along that grabs ahold of your soul and never lets go. I enjoy a lot of books, I love a lot of books, and, in fact, it takes a lot for me to dislike and even more to downright hate a book. But, rarely, do I come across books that affect me so deeply. Last year, it was The Great Alone by Kristin Hannah, and this year it’s undoubtedly BETTY by Tiffany McDaniel.

BETTY is a story, and not just a story but a fucking s-t-o-r-y, based on Tiffany McDaniel’s own mother, Betty and her family as she grew up. This book is labeled as fiction/historical fiction so it’s obviously quite clear that some of it may be exaggerated. However, if only 20% of what happened in this book happened in real life, that’s still way too much for one little girl. And, an even bigger testament is that even if this book is 100% fiction (which it’s not), it would still be magnificent.

Inside? You’ll find abuse, love, racism, and magic. You’ll come away with very strong feelings about every member of Betty’s 10-person family and I can’t say for sure, but that seems like a pretty difficult thing to do.

I was originally drawn to the Appalachian setting of the book being a Tennessee girl. I really enjoyed this part too as well as the deep and rich Cherokee teachings and stories.

This book is sad, like really sad. But, it is raw. And, those are the best kind of words in my opinion.

READ THIS NEXT  Blind Man's Bluff: A Memoir by James Tate Hill

McDaniel is clearly a master of words and a weaver of stories. If the part about Betty being a writer is true then it’s clear she passed it on to her daughter. And, I do wonder if there was a purpose behind the title being in all capital letters? From what I can tell, Betty (the person) is a force to be reckoned with and deserves to “take up all the space.” I like to think that’s why all capital letters, but maybe that’s just wishful thinking on my part.

And, if I haven’t sold you yet. I was gifted an ebook copy of BETTY, but will be ordering a physical copy as well as McDaniel’s other novel, The Summer That Melted Everything.

“And what is infinity but a tangled swear. A cracked circle. A space of fuschia sky.”

“Our land used to be this much,” he would say, holding his hands out to either side of him as he spoke of the eastern territory that had once belonged to the Cherokee before they were forcibly removed to Oklahoma.”

“The higher powers had made it the law of the land that the Cherokee must be ‘civilized’ or be taken from their home.”

“Before Christianity, the Cherokee celebrated being a matriarchal and matrilineal society. Women were the head of the household, but Christianity positioned men at the top.”

“The traditional Cherokee way of life was uprooted, along with the gender roles that had allowed women to have a presence equal to that of men.”

“I noticed he didn’t have the hands of a poor man nor the invisibility of one neither.”

“Jack-o’-lanterns out on porches quick to greet me with a smile and triangle eyes. Grocery store candy rustling in bags while crips leaves blow past the rake of the old man too weary to pile them. A single purple scarf carried by the wind down a dirt lane and a crow of no name flying overhead. This is October to me. A conquering circle of autumnal shadows, ghosts, and mothers.”

“There. are no small wars between girls. Everything is as epic as two wild birds sparring over the last worm.”

“Don’t need to sit in a pew to get the word of creation,” Dad would say. “All ya have to do is walk the hills to know there’s somethin’ bigger. A tree preaches better than any man can.”

“No wonder a woman is mostly anger,” Fraya said, staring at the dress in her hands. “There’s no room for happiness. Not after they get done with us.”

“You know what the heaviest thing in the world is, Betty? It’s a man on top of you when you don’t want him to be.”

“As girls, we were deemed not to be able to make our own decisions.”

“Stars don’t exist for us. Somewhere there is a world that we’re the insects to. Someone in that world has caught us. This planet we call home is really just a jar they keep us in. A big jar to us, but a small jar to them. Those lights are our airholes showin’ through to the light of the world we are too small for. I’m pokin’ more airholes for us to breathe. Sometimes I think we’re all gonna suffocate.”

“Listening to Cotton and the others, I knew what my father did not know when he was alive. That he was more than a filler. He was a lifetime of wildflower fields.”

“A girl comes of age against the knife, Betty. … But the woman she becomes must decide if the blade will cut deep enough to rip her apart or if she will find the strength to leap with her arms out and dare herself to fly in a world that seems to break like glass around her. May you have the strength.”