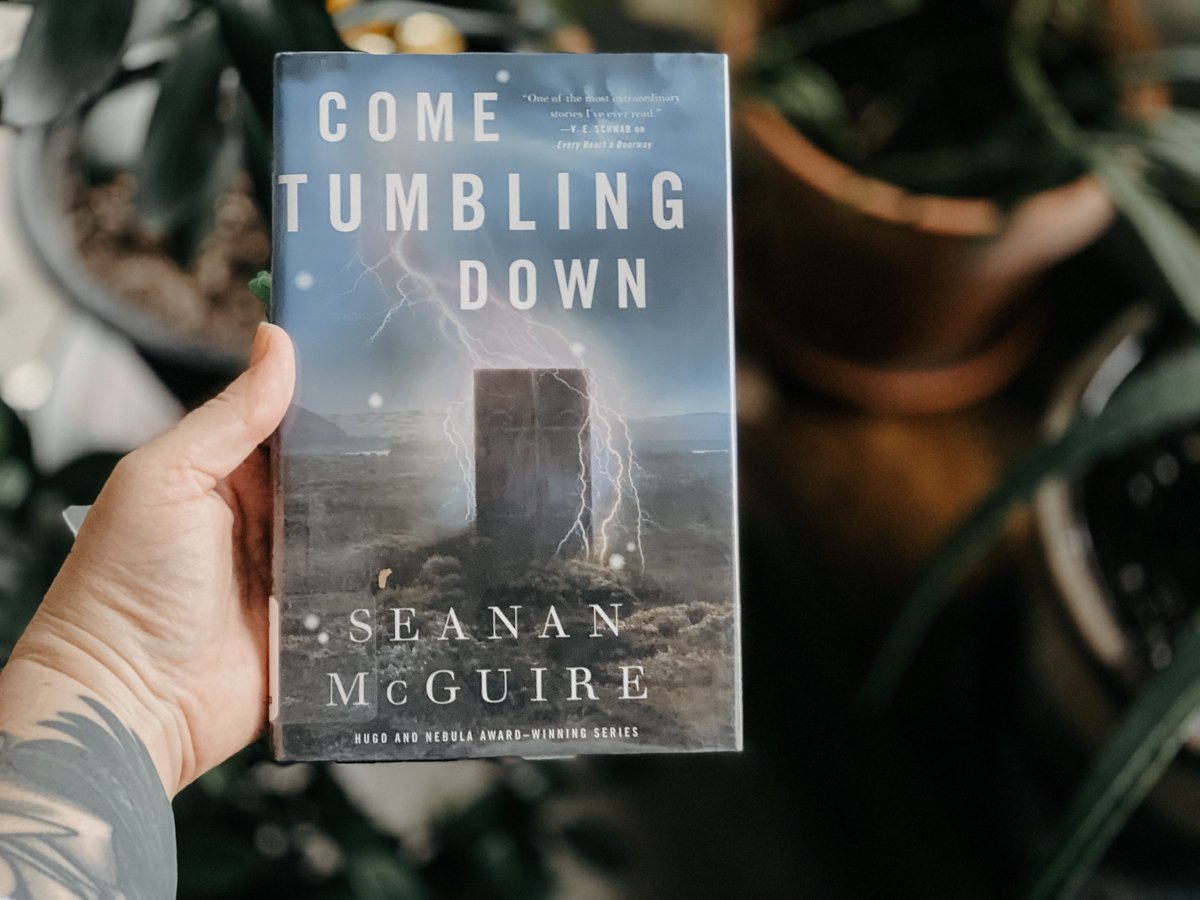 The fifth installment in Seanan McGuire’s award-winning, bestselling Wayward Children series, Come Tumbling Down picks up the threads left dangling by Every Heart a Doorway and Down Among the Sticks and Bones

When Jack left Eleanor West’s School for Wayward Children she was carrying the body of her deliciously deranged sister–whom she had recently murdered in a fit of righteous justice–back to their home on the Moors.

But death in their adopted world isn’t always as permanent as it is here, and when Jack is herself carried back into the school, it becomes clear that something has happened to her. Something terrible. Something of which only the maddest of scientists could conceive. Something only her friends are equipped to help her overcome.

Eleanor West’s “No Quests” rule is about to be broken.

Hi! I’m Seanan McGuire, author of the Toby Daye series (Rosemary and Rue, A Local Habitation, An Artificial Night, Late Eclipses), as well as a lot of other things. I’m also Mira Grant (www.miragrant.com), author of Feed and Deadline.

Born and raised in Northern California, I fear weather and am remarkably laid-back about rattlesnakes. I watch too many horror movies, read too many comic books, and share my house with two monsters in feline form, Lilly and Alice (Siamese and Maine Coon).

READ THIS NEXT  A Chance Encounter by Rae Shaw

In the first Wayward Children book, Every Heart a Doorway, we were introduced to Miss West’s Home for Wayward Children, where children are given a safe place to recover from their otherworldly experiences. All of these children have somehow visited different lands – of all different varieties. The common denominator? They’ve all been forced to return “home.”

This fifth book has us back in the Moors with twin sisters Jack and Jill. This felt more like a filler book in the Wayward Children series. While I enjoyed it, I think I would have enjoyed exploring a new world more.

Jack returns to the school with a bit of a predicament and she needs the help of the other students. The story follows Kade, Christopher, Sumi, and Cora as they follow Jack into the Moors.

While this wasn’t my favorite in the series, I still absolutely love it and McGuire’s writing is still magical as always.

“Hope is a vicious beast. It sinks in its claws and it doesn’t let go.“

“No one should have to sit and suffer and pretend to be someone they’re not because it’s easier, or because no one wants to help them fix it.”

“The world doesn’t stop spinning because you’re sad, and that’s good; if it did, people would go around breaking hearts like they were sheets of maple sugar, just to keep the world exactly where it is.”

“We can be sad and we can be hurt and we can even be killed, but the world keeps turning, and the things we’re supposed to do keep needing to be done.”

“New things are the best kind of magic there is.”

“Sometimes, after all, that’s what must be said to make a hero: the willingness to keep running even after it becomes clear that the entire exercise is doomed to failure. Sometimes heroism is pressing on when the ending is already preordained.”

“‘I swear, ‘I’m going to become a deathless creature of the night’ is not a substitute for a comprehensive fitness plan.'”