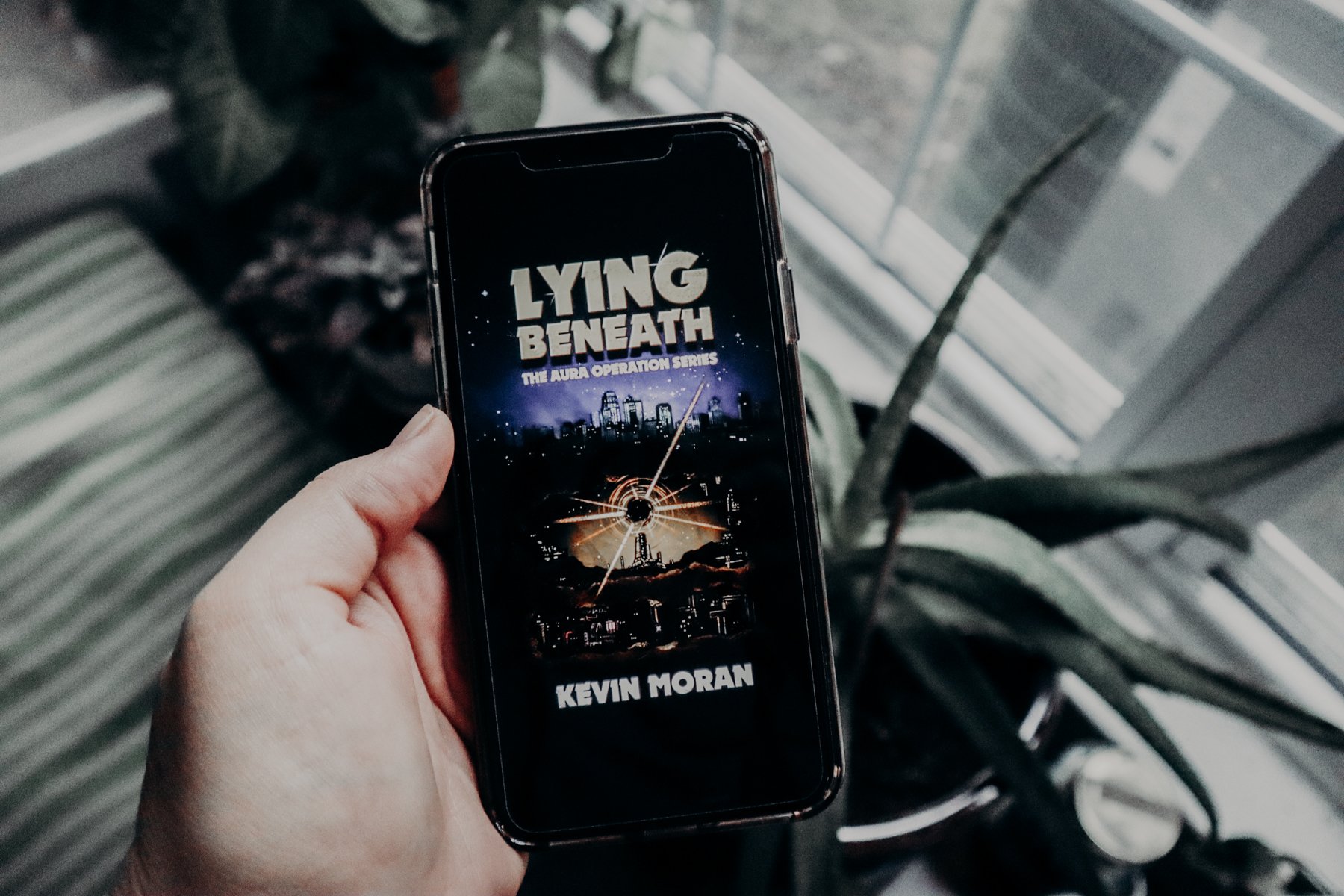 Underneath the city lies an advanced society, and its dark secrets could bury her alive.

Looking for a good science fiction book with excellent worldbuilding, a fearless female protagonist, and fantastic writing? Lying Beneath is the book for you!

I received a copy of Lying Beneath book from the author in exchange for my honest review. All opinions are, of course, my own.

Lying Beneath (The AURA Operation #1)

Moran has been writing books since he first learned what a book was. His early drafts were held together with pins, staples, glue and string. His process has since improved and he now publishes with An Ink Mover, LLC. He currently has four works available for purchase.

To be honest, I was contacted by the author. However, I’m very glad I was and that I decided to read it. Already excited about book #2! Additionally, I am a fan of science fiction so as soon as I read the summary, I knew I was interested and wanted to read this book.

“Ayla peered through the small crack between the door and the cold concrete floor, watching for the man with the gun.”

Underneath the city lies an advanced society, and its dark secrets could bury her alive.

Ayla worries she’ll be stuck waitressing for pennies until she dies. She longs for adventure, for something to save her from the paycheck-to-paycheck life she lives with her long-time boyfriend, Derek, who plays it safe and only half-tolerates her thirst for exploration.

READ THIS NEXT  Uphill and Into the Wind by David Reed

With her trusty camera in tow, she explores abandoned buildings, searching for something—anything—interesting. One night, she finds a mysterious trapdoor in an old warehouse which leads to a futuristic society right beneath her feet.

This is the adventure she’s been looking for, but the people underground don’t appreciate her intrusion and she quickly finds herself locked up and questioned. They think she’s a spy, their questions are getting more intrusive, and Derek has no idea where she is.

Ayla must find a way out of this underground world that’s not at all the adventure she thought she wanted, or she may never see Derek again…

To be quite honest, Ayla sounds a bit like me. I definitely felt myself relating to her and if you’ll notice my favorite quotes that I highlighted below, they literally sound like something that could have come out of my own mouth.

Ayla has been living an uneventful life (at least in her eyes) and she is eager for adventure to the point that it is disruptive to her life. She loved her boyfriend, their dog, and their life together, but past that, she craved change.

Well, she definitely got her wish after stumbling across a trap door in an abandoned building found while doing some good ole urban exploring – something I also do.

The Cover. I know, I know. Don’t ever judge a book by its cover, and I don’t. However, I still appreciate a good cover when I see one. At first glance, I didn’t really notice it to be honest, but after reading the book and entering the world that Moran has built, I’m now fascinated by the cover.

World Building. Worldbuilding is no easy feat. It’s something that is done really well or falls flat. Kevin Moran is definitely an author of the former. I was really impressed with the world-building skills. While this was science fiction, I actually could totally see something like this being a possibility.

Just imagine if all of the people from the 50s and 60s who built the bomb shelters just never came out and an entire world evolved over the past several decades. Totally possible…

A Female Protagonist. I love a good female protagonist and I do have some guilty pleasure books, but I appreciate when that protagonist isn’t mostly focused on the love interest. While, yes, Derek is obviously a big part of Ayla’s life (I mean they do live together and have a dog together so it’d be a bit weird if he wasn’t a large part of it), but she’s also fully capable of taking care of herself, doesn’t wait for him to go on the search for adventure, and so on.

I didn’t really dislike anything about this book. It kept me entertained from pretty much the get-go. It didn’t seem drawn out – pretty much the perfect length. However, since I always try to find something constructive, I’d have to say:

“He didn’t understand the lack of adventure and the feeling of meaninglessness engulfing her lately.”

“Time passed without answers to her ongoing questions. She found herself in a new place in life but continually waiting for the next thing just around the corner…”