I received a copy of Red Hail from the author in exchange for my honest review. All opinions are, of course, my own.

Jamie is a reader, writer, podcaster, feminist, and owner of two adorable yet spoiled dogs. She has published a couple dozen horror/SFF short stories and novellas over the years. At the moment, she’s the writer and producer of SPINES, MIRRORS, and THE SIX DISAPPEARANCES OF ELLA MCCRAY, all dark audio drama podcasts. You can check out her audio drama work at Spines or at Mirrors.

I was contacted by the author and requested to read and review, but the cover and description definitely drew me in and sealed the deal.

“Anza stood at the window and watched her fathers’ truck bump down the driveway.” 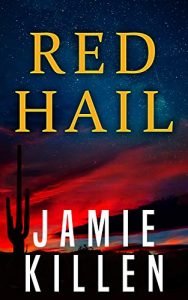 Professor Colin Ayres has spent years researching the strange story of Galina, Arizona, a sleepy border town ripped apart by violence and paranoia after the outbreak of a mysterious illness in 1960. Colin is certain the Galina Incident was simply a case of mass hysteria. But when his partner, Alonzo, starts exhibiting strange symptoms, Colin is shocked to realize they are the same as those that emerged in Galina decades ago.

As Alonzo’s condition worsens, Colin scrambles to piece together what really happened during that terrible summer in the past. He uncovers a story of murder, corruption, and fanaticism. The deeper he digs, the more he becomes convinced that what happened in Galina wasn’t mass hysteria after all.

When others start to develop the same eerie symptoms, Colin must confront the possibility that someone—or something—is driving the plague. Guided by rumors of a person who found a way to stop the plague in the sixties, Colin races to find answers before the disease destroys Alonzo and everyone else it touches.

Red Hail is told through two timelines – 1960 and the present day. In 1960, the Red Hail fell in the small town of Galina, and what transpired that summer forever changed the town and its inhabitants, and as we find out the future generations.

Men, women, children, and even animals suddenly and mysteriously came down with frightening, but not life-threatening, symptoms. At first, there didn’t seem to be any rhyme or reason to who showed symptoms.

Three individuals put everything into studying the epidemiology of the Red Hail plague. Eventually, they were able to put an end to it, but only for 60 years.

Sixty years later, and the same thing has started happening to the grandchildren of the original ones who had symptoms.

In a mirror-like future, three individuals start studying what is making this happen. They look at the history of the first Red Hail, speaking with the descendants or still living from Galina in 1960, and more.

I had no idea what to expect, but this book didn’t take long at all to pull me in. I’m a big horror fan, but don’t read a ton of sci-fi. This book has a really nice balance between the two.

READ THIS NEXT  Cemetery Boys by Aiden Thomas

Additionally, I really appreciated and loved the diversity of the characters and the issues that they face. With LGBTQ and BIPOC representation in the book, I couldn’t help but notice. Even one of the main characters is a bisexual man which you hardly ever see in books or films.

I thought the ending tied up really nicely in a way that I was satisfied if this is a stand-alone novel, but could also have a sequel one day. The characters and plot were strong and well-executed and suspenseful enough that I couldn’t always determine what was coming.

10 Tips to Becoming the Best Version of Yourself