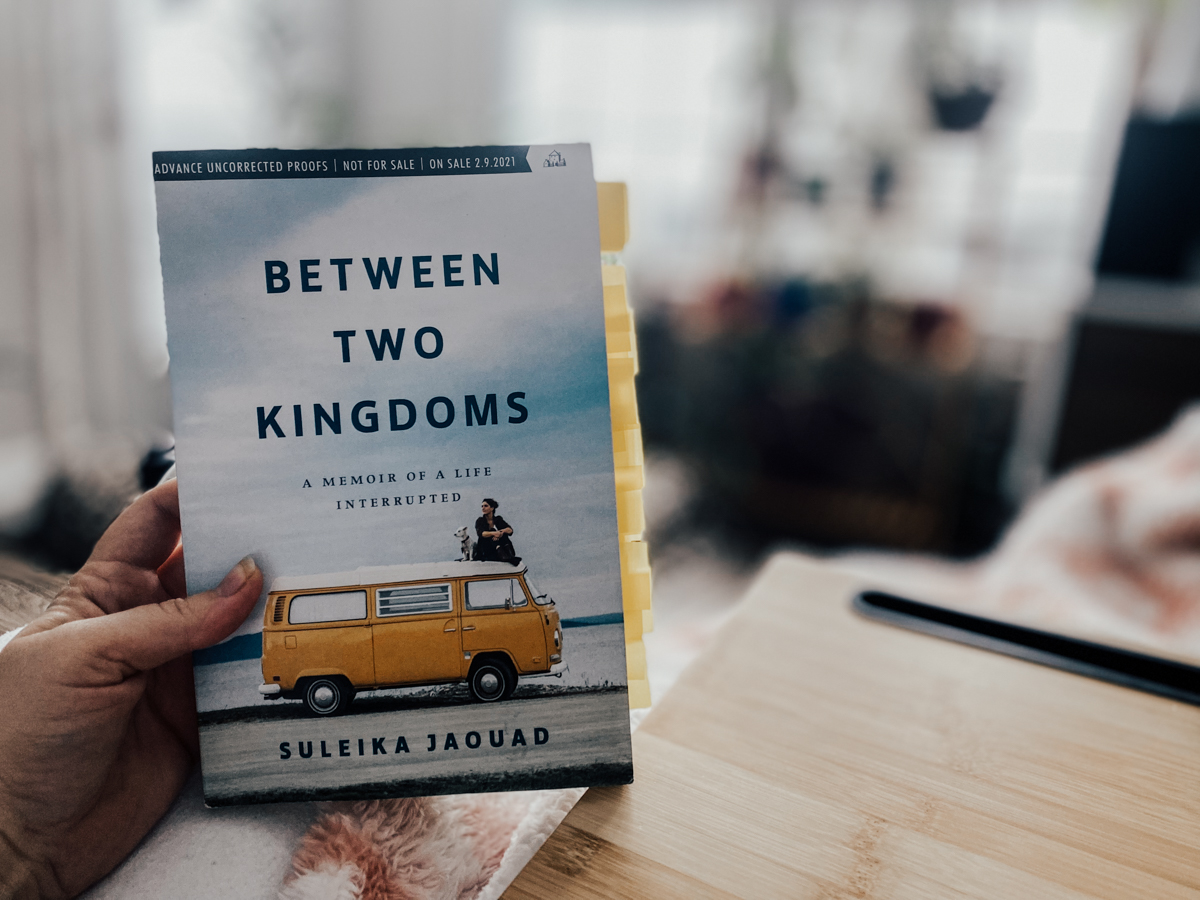 Between Two Kingdoms: A Memoir of a Life Interrupted

A searing, deeply moving memoir of illness and recovery that traces one young woman’s journey from diagnosis to remission and, ultimately, a road trip of healing and self-discovery.

In the summer after graduating from college, Suleika Jaouad was preparing, as they say in commencement speeches, to enter “the real world”. She had fallen in love and moved to Paris to pursue her dream of becoming a war correspondent. The real world she found, however, would take her into a very different kind of conflict zone.

It started with an itch—first on her feet, then up her legs, like a thousand invisible mosquito bites. Next came the exhaustion, and the six-hour naps that only deepened her fatigue. Then a trip to the doctor and, a few weeks shy of her twenty-third birthday, a diagnosis: leukemia, with a 35 percent chance of survival. Just like that, the life she had imagined for herself had gone up in flames. By the time Jaouad flew home to New York, she had lost her job, her apartment, and her independence. She would spend much of the next four years in a hospital bed, fighting for her life and chronicling the saga in a column for The New York Times.

When Jaouad finally walked out of the cancer ward—after three and a half years of chemo, a clinical trial, and a bone marrow transplant—she was, according to the doctors, cured. But as she would soon learn, a cure is not where the work of healing ends; it’s where it begins. She had spent the past 1,500 days in desperate pursuit of one goal—to survive. And now that she’d done so, she realized that she had no idea how to live.

How would she reenter the world and live again? How could she reclaim what had been lost? Jaouad embarked—with her new best friend, Oscar, a scruffy terrier mutt—on a 100-day, 15,000-mile road trip across the country. She set out to meet some of the strangers who had written to her during her years in the hospital: a teenage girl in Florida also recovering from cancer; a teacher in California grieving the death of her son; a death-row inmate in Texas who’d spent his own years confined to a room. What she learned on this trip is that the divide between sick and well is porous, that the vast majority of us will travel back and forth between these realms throughout our lives. Between Two Kingdoms is a profound chronicle of survivorship and a fierce, tender, and inspiring exploration of what it means to begin again.

READ THIS NEXT  American Animals: A True Crime Memoir by Eric Borsuk

Suleika Jaouad wrote the Emmy Award-winning New York Times column “Life, Interrupted.” Her essays and reported features have appeared in The New York Times Magazine, Vogue and NPR. She is the creator of the Isolation Journals, a global project cultivating creativity and community during challenging times. Between Two Kingdoms is her first book.

Trust me when I say that these are just a FEW of my favorite quotes. Here’s a photo of the book after I was done as proof.

“People often respond to the news of tragedy with ‘words fail,” but words did not fail me that day, or the next, or thereafter–they poured out of me, first cautiously, then exuberantly, my mind awakening as if from a long slumber, thoughts tumbling out faster than my pen could keep up.”

“I felt as though I was walking around with a loaded gun pressed against my temple. A medical game of Russian roulette.”

“‘Write,’ instructs Annie Dillard, ‘as if you were dying.’ We are all terminal patients on this earth––the mystery is not ‘if’ but ‘when’ death appears in the plot line.”

“To this day, I’ve never been more prolific. Death can be a great motivator.”

“The confluence of these impending milestones was dizzying: a dream and a nightmare dancing the tango.”

“My cancer was a junkyard dog. It may been fenced in for now, but it was mean and growling, threatening to dig under the barbed wire and escape.”

“Oscar [her dog] couldn’t change what was going on in my marrow, but he was working a different kind of magic.”

“Death never comes at a good time, but getting a death sentence when you’re young is a breach of contract with the natural order of things.”

“‘Everyone who is born holds dual citizenship, in the kingdom of the well and in the kingdom of the sick,” Susan Sontag wrote in Illness as Metaphor. ‘Although we all prefer to use only the good passport, sooner or later each of us is obliged, at least for a spell, to identify ourselves as citizens of that other place.'”

“Trauma has a way of dividing your view of the world into two camps: those who get it and those who don’t.”

“As a woman traveling alone, I feel like what Gloria Steinem described as a ‘celestial bartender’: Strangers welcome me into their homes, share secrets with me that they wouldn’t disclose to a therapist, invite me to partake in their family traditions, and send me off with homemade pies.”

“‘Everyone who is born holds dual citizenship, in the kingdom of the well and in the kingdom of the sick,” Susan Sontag wrote in Illness as Metaphor. ‘Although we all prefer to use only the good passport, sooner or later each of us is obliged, at least for a spell, to identify ourselves as citizens of that other place.'”

Between Two Kingdoms by Suleika Jaouad is a memoir about her cancer journey. And, this isn’t just a fluffy memoir, this is a breathtaking and heartbreaking piece of beautiful literary nonfiction.

READ THIS NEXT  The Lady of the Cliffs by Rebecca Kightlinger

Some may recognize her name from her New York Times column “Life, Interrupted” which was syndicated in numerous newspapers and magazines across America. A column that she ended up obtaining and writing from her hospital bed.

The book begins just shortly before her diagnosis of acute myeloid leukemia (AML), a bone marrow cancer, at just 22 years of age. It then goes on to tell in great poetic detail of her diagnosis, the toll it took on her and her relationships, her journey towards “normalcy” after a lengthy and exhausting three years of treatment, and her cross-country road trip afterward.

There are not too many people whose lives are untouched in some way by cancer. I know I’m lucky to be one of the few who hasn’t had a close connection with cancer, but regardless of whether or not you have, anyone should read this book.

I did find many correlations between her words and some of my own traumas, however. Her trauma and much of my own trauma occurred in our young adult years – a time that is supposed to be carefree and fun.

Her quote really stuck with me: “Trauma has a way of dividing your view of the world into two camps: those who get it and those who don’t.”

After her treatment, Suleika was forced, but also desired, to make some changes to accommodate her body’s physical limitations but also to figure out who she was. She embarked on a 100-day road trip taking in 33 states while meeting up with twenty of the strangers whose words and thoughts help sustain her during her cancer battle. These were mostly people who had connected with her via her column and included a death row inmate, fellow cancer survivors, a mother of young man who died by suicide, and so many more.

She crafted their stories, and not just her own, in such absolutely beautiful ways that made me invested in all of their stories.

I will be thinking about and re-reading this memoir for a long time. I thank Suleika for sharing her story with the world.