I received a copy of Morrigan’s Blood in exchange for my honest review.
All opinions are, of course, my own. I’d like to thank Bewitching Book Tours for including me on this tour.

Laura Bickle grew up in rural Ohio, reading entirely too many comic books out loud to her favorite Wonder Woman doll. She now dreams up stories about the monsters  under the stairs and sometimes reads them to her cats. Her books have earned starred reviews from Publishers Weekly and Kirkus. Laura’s work has also been included in the ALA’s Amelia Bloomer Project 2013 reading list and the State Library of Ohio’s Choose to Read Ohio reading list for 2015-2016. 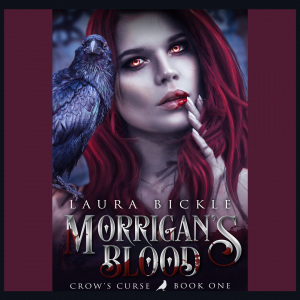 Garnet has the blood of the legendary Morrigan – and legions of vampires and witches will go to war to possess that power.
As a trauma surgeon, Garnet Conners has seen more than her fair share of blood. But when one of her patients walks off the operating table and disappears into the night, she finds herself caught in a war between legions of vampires and witches in her city.

Garnet has dreamed of bloody battlefields for years – and a mysterious lover who controls a kingdom. In her waking life, Garnet is shocked to meet that man in a club. Merrel knows her from another life, a life in which she was the legendary Morrigan, goddess of death and war. Garnet rejects the notion of magical incarnations altogether. But she falls in with Sorin, a handsome warlock who’s determined to protect the former bootlegger city of Riverpointe from a secret society of vampires. Haunted by crows and faced with undeniable proof of magic, Garnet scrambles to protect her career and loved ones from magical violence.

READ THIS NEXT  Zoon Garden by Jordan O'Donnell

Abducted by vampires who seek to turn her into a vampire against her will, can Garnet seize the power of the legendary Morrigan to forge her own path in her embattled city? Or will she be forced to serve as a fearsome weapon in a deadly nocturnal war?

I’ve been very interested in Morrigan for quite some time. The Morrígan or Mórrígan is a figure from Irish mythology.

The Morrígan is mainly associated with war and fate, especially with foretelling doom, death, or victory in battle. She often appears as a crow and incites warriors to battle and can help bring victory.

The book begins in ancient times and we meet Morrigan and witness her capabilities in battle. In this re-telling, the original Morrigan is also a vampire and is known as the Queen of the Night, relishing in blood – obviously.

Simultaneously, we find ourselves in contemporary times with Garnet Conners – a talented trauma surgeon who just so happens to have a crow-shaped birthmark on her shoulder. I have a big fascination for crows and ravens, having several tattoos of them myself. They’re incredibly intelligent and I would call myself very lucky to find myself friends amongst crows as Garnet does.

Garnet eventually finds herself caught in a war between vampires and witches which is surprising on many levels. When she learns that she has the blood of the Morrigan, it doesn’t’ take long for the witches and the vampires to both want her on their side.

A good mythology re-telling is always exciting, especially when it’s a very specific piece of mythology I was already interested in. The characters are great and their development is strong.

This is book one in the series, and books two and three will be released in October and November, respectively. Which is awesome because you won’t have to wait long!

Heart of the Raven Prince by Tessonja Odette

When We Believed in Mermaids by Barbara O’Neal