I received a copy of Sister of the Chosen One in exchange for my honest review.
All opinions are, of course, my own. I’d like to thank YA Bound Book Tours for including me on this tour.

Sister of the Chosen One

Colleen Oakes is the bestselling author of books for both teens and adults, including The Black Coats, Queen of Hearts Series, and The Wendy Darling Saga. She lives in North Denver with her husband and son. You can visit her at www.colleenoakes.org, on her Author Colleen Oakes Facebook page, on Instagram (@colleenoakes), or on Twitter (@ColleenOakes_).

Erin Armknecht lives in St. Louis with her husband, son, and rescue dog. Sister of the Chosen One is her debut novel. You can find her Twitter @EisforErin, and on Instagram @erinarmknecht. 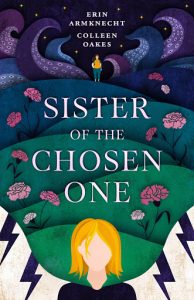 “Action-packed, empowering, and comic-book vivid, Sister of the Chosen One will have you cheering.” – Natalie Mae, Author of The Kinder Poison

Valora Rigmore understands pressure. As the Chosen One (resident telekinetic, superstar, and model girlfriend) her life revolves around it. According to an ancient prophecy, Valora is destined to fight Erys, a terrifying individual with the power to control monsters. Valora is worshipped at school, in the press, and by her parents, but as the battle with Erys looms near, the cracks in her perfect façade are beginning to show.

Her twin, Grier Rigmore understands disappointment. A curvy bookworm perpetually in the shadow of her sister’s legacy, Grier’s life is one long humiliation after another. However, as Valora’s fandom reaches an unbearable fever pitch, an interesting new boy and a clever teacher spark Grier’s curiosity about her own powerful gifts.

READ THIS NEXT  Sky in the Deep by Adrienne Young

When Grier’s star begins to rise, so do more questions, like: who is truly the Chosen One, and will two sisters at odds survive long enough to understand the answer?

Best described as Harry Potter meets Mindy Kaling, Sister of the Chosen One is a darkly funny, female empowered YA epic about siblings struggling to connect with each other, free themselves of labels and save the world in the process.

It’s been a long time since I’ve read a book by two authors. And, I’m not sure that I’ve read one where each author wrote from the perspective of two separate characters (as opposed to just writing the whole novel together). I really loved this aspect and it worked really well!
Each sister is given a well-rounded and thorough deep dive because of this and The Sister of the Chosen One is a story about the journey of self-discovery for both sisters with bonding and rivalry along the way – as siblings do!
I also really loved the world-building that Oakes and Armknecht created masterfully. The book was definitely captivating and even humorous at times. The addition of telekinetic powers was an added bonus to what was already a powerful story and writing.
Check Price on Amazon
Read Reviews on GoodReads

Under the Whispering Door by TJ Klune