I received a copy of The Girl From the Hermitage in exchange for my honest review.
All opinions are, of course, my own. I’d like to thank Rachel’s Random Resources for including me on this tour.

The Girl From the Hermitage 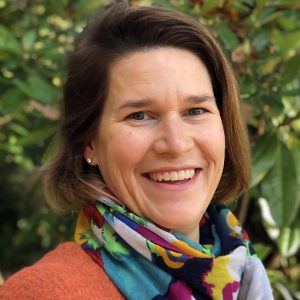 Originally from Michigan, Molly Gartland worked in Moscow from 1994 to 2000 and has been fascinated by Russian culture ever since. She has an MA in Creative Writing from St Mary’s University, Twickenham, and lives in London. The manuscript for her debut novel The Girl from the Hermitage was shortlisted for the Impress Prize and longlisted for the Mslexia Novel Competition, the Bath Novel Award, and Grindstone Novel Award.

“Mikhail scrapes a knife against the wall and a strip of yellowing floral wallpaper curls on the metal edge, peeling away the plaster. Cradling it in his palms, glue side up, he returns to the kitchen.” 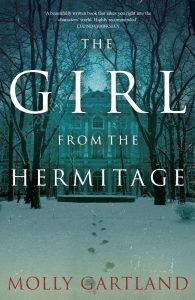 Galina was born into a world of horrors. So why does she mourn its passing?

It is December 1941, and eight-year-old Galina and her friend Vera are caught in the siege of Leningrad, eating wallpaper soup and dead rats. Galina’s artist father Mikhail has been kept away from the front to help save the treasures of the Hermitage. Its cellars could provide a safe haven, as long as Mikhail can survive the perils of a commission from one of Stalin’s colonels. Three decades on, Galina is a teacher at the Leningrad Art Institute. What ought to be a celebratory weekend at her forest dacha turns sour when she makes an unwelcome discovery. The painting she starts that day will hold a grim significance for the rest of her life, as the old Soviet Union makes way for the new Russia and her world changes out of all recognition. Warm, wise, and utterly enthralling, Molly Gartland’s debut novel guides us from the old communist-era, with its obvious terrors and its more surprising comforts, into the bling of 21st-century StPetersburg. Galina’s story is an insightful meditation on aging and nostalgia as well as a compelling page-turner.

READ THIS NEXT  Waterborne by J Luke Bennecke

I have a not-so-secret tidbit of information about me – I’m pretty much drawn to anything Russian. Books, movies, and tv shows immediately draw my interest if set in Russia. I can’t really explain why.

So, of course, when I read the description, I knew I wanted to read this book.

The Girl From the Hermitage is Molly Gartland’s debut novel and wow did she make a splash. Her writing is spectacular and the story and characters are expertly developed and portrayed.

Gartland bought a painting while living in Moscow and decided to research the artist several years later. And, that is how she found Galina and her story and the concept of this novel was born.

Gartland actually spent many years in Russia and you can really see that she understands the people and the culture because of that.

This piece of historical fiction is set during the time of the breakdown of the Soviet Union and the siege of Leningrad (St. Petersburg).

For a quick history lesson, The Stage Hermitage Museum is a museum of art and culture in Saint Petersburg. It is the second largest art museum in the world and was founded in 1764. I think that’s important as art plays a vital part in the story. I mean, look at the title of the book.

Galina starts out as a starving war child that uses art as an escape mechanism to immerse herself and get away from the horrible realities of her life. She is just an 8-year old child living in the cellar of The Hermitage during the siege along with her art restorer father. Her father is commissioned to paint a  portrait of a colonel’s sons and upon going to their home, he realizes the stark differences between his lifestyle and the colonel’s.

READ THIS NEXT  Morrigan's Blood: Crow's Curse – Book One by Laura Bickle

Eventually, Galina goes on to become a wife, mother, grandmother, and a great-grandmother. Art continues to be a large part of her life as she becomes a teacher of art and a portrait painter.

In Praise of Paths by Torbjørn Ekelund