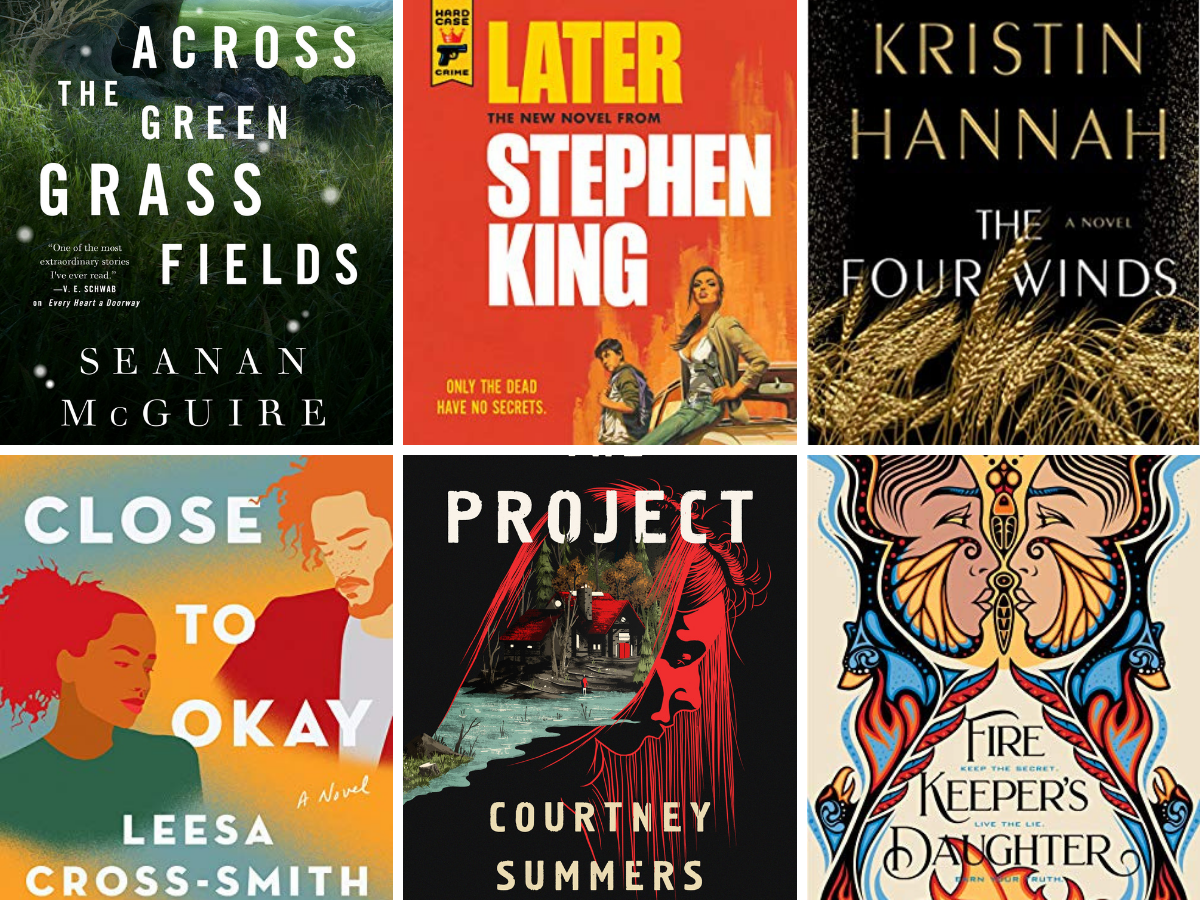 Sometimes I get so caught up in all the books I’ve wanted to read for so long, that I own and never read, and so on that I forget to keep up with upcoming book releases. But, after reading 100 books in 2020 with several being new releases, I’m fully addicted to the hype. So, I’m excited to put together this list of 2021 book releases in anticipation.

These upcoming 2021 book releases are so exciting that I’ll never get that TBR pile down anytime soon.

This list will continuously be updated so check back often!

My Story, Your Story was my pick for Amazon’s December First Reads, and I cannot wait to start this one. Palmen tells a fictionalized story of Ted Hughes’s relationship with Sylvia Plath – through his eyes. Amazon | Goodreads

I love a good cover and Lore is visually stunning. As punishment for their rebellion, nine Greek gods are banished to earth as mortals. Blood descendants hunt the gods hoping to gain their powers. Amazon | Goodreads

Set 17 years prior to the events in The Hate U Give, Maverick Carter deals drugs for the King Lords to support his family. At 17 and now with a child of his own on the way, he decides that he wants to forge a new path. Amazon | Goodreads

You Have a Match by Emma Lord

When Abby signs up for a DNA service, it’s mainly to give her friend and secret love interest, Leo, a nudge. After all, she knows who she is already: Avid photographer. Injury-prone tree climber. Best friend to Leo and Connie…although ever since the B.E.I. (Big Embarrassing Incident) with Leo, things have been awkward on that front.

But she didn’t know she’s a younger sister.
Amazon | Goodreads

READ THIS NEXT  The Unravelling of Maria by FJ Curlew

Across the Green Grass Fields by Seanan McGuire

A young girl discovers a portal to a land filled with centaurs and unicorns in Seanan McGuire’s Across the Green Grass Fields, a standalone tale in the Hugo and Nebula Award-winning Wayward Children series.

A razor-sharp, wickedly smart suspense debut about an ambitious influencer mom whose soaring success threatens her marriage, her morals, and her family’s safety.

The Four Winds By Kristin Hannah

I fell in love with Hannah’s writing after The Great Alone and I can’t wait to read this new book. It’s 1934 in Texas during the Great Depression and Dust Bowl Era. Elsa Martinelli must decide if she’ll stay at fight or move further out west. Amazon | Goodreads

This Close To Okay by Leesa-Cross Smith

This one is sitting on my bookshelf waiting for me. It was my pick for December’s Book of the Month. Newly divorced Tallie Clark is heading home when she saves a man from jumping off of a bridge. He doesn’t know that she is a therapist. Told through both of their perspectives, these two strangers help each other through a powerful weekend. Amazon | Goodreads

American Royals meets The Winners Curse in the first book of bestselling author Brittany Cavallaro’s new duology, set in an alternate history American monarchy where a girl grapples for control of her own life in the middle of a looming war.

The Project by Courtney Summers

This one sounds so fascinating to me. When their parents die, Lo’s sister Bea joins The Unity Project — a cult disguised as a seemingly charitable organization. Can Lo expose the group or will she fall under its leader’s charm?  Amazon | Goodreads

READ THIS NEXT  Return to Hiroshima by Bob Van Laerhoven

What Big Teeth by Rose Szabo

Rose Szabo’s thrilling debut What Big Teeth is a dark, gothic fantasy YA novel about a teen girl who returns home to her strange, wild family after years of estrangement, perfect for fans of Wilder Girls…

The Gilded Ones by Namina Forna

One of the most-anticipated fantasy 2021 new book releases, Deka fails her blood ceremony. She must decide if she wants to accept a fate worse than death or fight for the emperor in an army of young women.  Amazon | Goodreads

The Witch’s Heart by Genevieve Gornichec

When a banished witch falls in love with the legendary trickster Loki, she risks the wrath of the gods in this moving, subversive debut novel that reimagines Norse mythology.

This heart-pounding, can’t-take-your-eyes-off-it debut novel is set in the rolling hills of Virginia horse country, where aspiring equestrian Roan trains for the Olympics, coached by her father. From the opening scene, in which the fifteen-year-old self-treats her own UTI, we wonder: who is it who is abusing Roan, and how long has it gone on?

After witnessing a murder, Daunis goes undercover for the FBI. She finds herself torn apart from her community, the Ojibwe reservation, her crush on Jaime, and a potentially deceiving and harmful investigation.  Amazon | Goodreads

Maddie thought her problems were over. She saved the Inn at Havenfall—a sanctuary between magical worlds—from the evil Silver Prince. But there’s more work to be done to protect the Inn—Maddie must put an end to the black-market trading of magical objects and open the Inn’s doors to the once feared land of shapeshifters.

READ THIS NEXT  Girl Out of Place by Syl van Duyn

The Lost Apothecary by Sarah Penner

In 18th-century London, Nella sells secret poisons to women who need protection from abusive and oppressive men. In present-day London, Caroline receives a clue to the historic and unsolved apothecary murders.  Amazon | Goodreads

I love me some Stephen King. Jamie has the ability to see and learns things that others cannot. An NYPD detective draws Jamie into a case, forcing him to grow up more quickly.  Amazon | Goodreads

Lost in the Never Woods by Aiden Thomas

She’s Too Pretty to Burn by Wendy Heard

An electric romance set against a rebel art scene sparks lethal danger for two girls in this expertly plotted YA thriller.

The Prison Healer by Lynette Noni

Seventeen-year-old Kiva Meridan has spent the last ten years fighting for survival in the notorious death prison, Zalindov, working as the prison healer. But no one has ever survived.

The Sea Is Salt and So Am I by Cassandra Hartt

West Finch is one hurricane away from falling into the sea. Yet sixteen-year-old Harlow Prout is determined to save her small Maine hometown.

For the Wolf by Hannah F. Whitten

A dark, sweeping debut fantasy novel about a young woman who must be sacrificed to the legendary Wolf of the Wood to save her kingdom. But not all legends are true, and the Wolf isn’t the only danger lurking in the Wilderwood.