I am technically behind schedule, but I’m not worried. I’ve been reading really long books so they’re taking me a while. 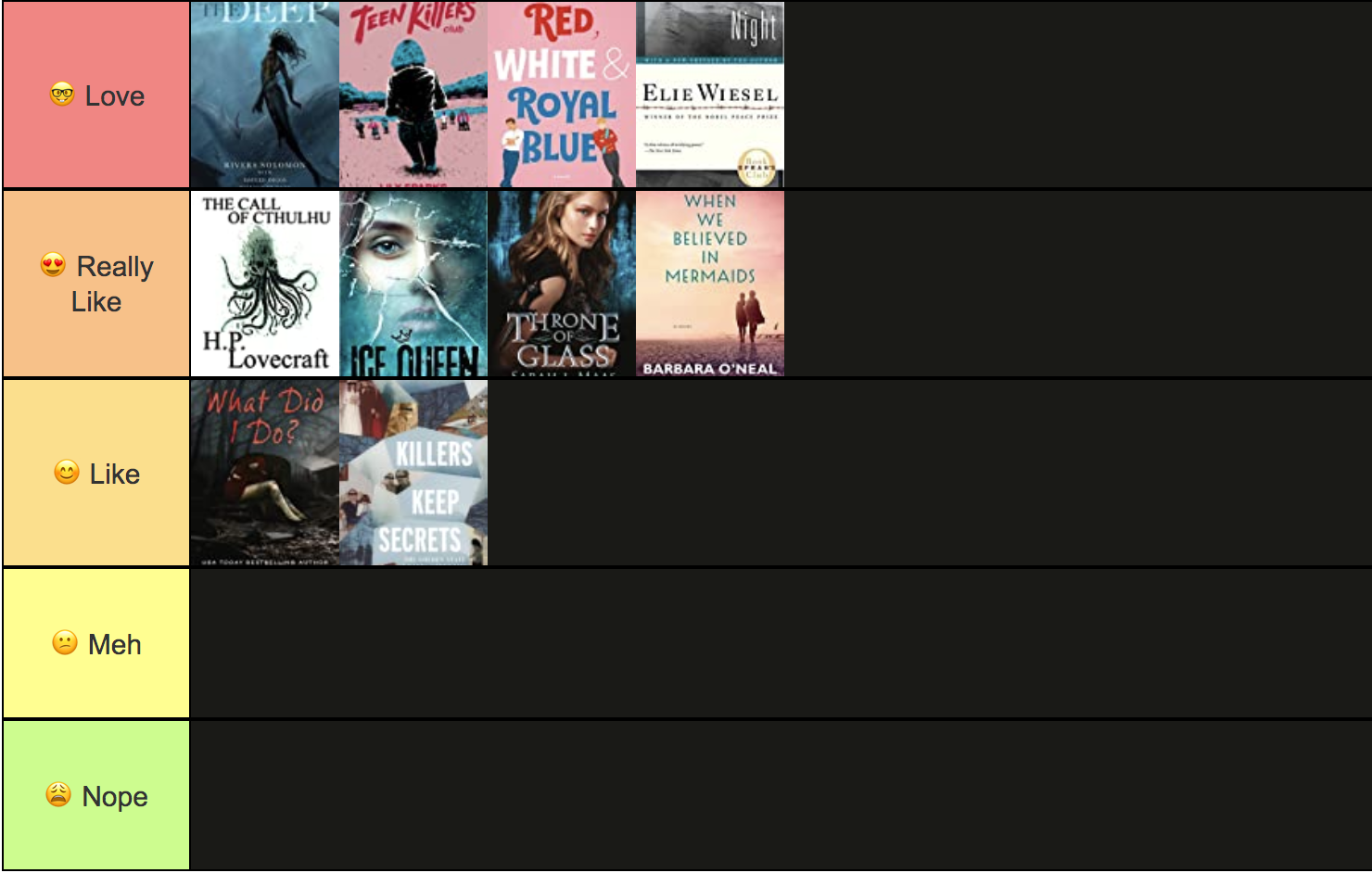 The Deep by Rivers Solomon – Yetu holds the memories for her people—water-dwelling descendants of pregnant African slave women thrown overboard by slave owners—who live idyllic lives in the deep.

What Did I Do? by Colleen S. Myers – Sixteen-year-old Addy is having strange dreams about a cabin in the woods and her father. Meanwhile, her tiny town is reeling from the murders of three teenagers, and then four.

The Call of Cthulhu by H.P. Lovecraft – Lovecraft is considered by many as the creator of the modern horror story. In his macabre tales, demonic spirits, terrifying rites, ancient curses and aliens meet in rural New England. The Call of Cthulhu is one of his best and most famous works.

READ THIS NEXT  Orange City by Lee Matthew Goldberg

Teen Killers Club by Lily Sparks – Framed for the murder of her best friend, a young girl joins a super-secret society of teenage assassins to avoid a lifetime behind bars–and discovers her own true self–in this mesmerizing debut novel.

Ice Queen by Felicia Farber – How can an innocent high school junior get caught up in a sexting scandal? Blair Evans learns that it’s pretty easy. Getting out of it is the hard part. Even worse, Blair discovers that the very laws that are meant to protect her end up turning her into a criminal.

Throne of Glass by Sarah J. Maas – After serving out a year of hard labor in the salt mines of Endovier for her crimes, 18-year-old assassin Celaena Sardothien is dragged before the Crown Prince. Prince Dorian offers her her freedom on one condition: she must act as his champion in a competition to find a new royal assassin.

READ THIS NEXT  The Checklist Book by Alexandra Franzen

Killers Keep Secrets by James Huddle – In April 2018, the long-unsolved Golden State Killer case burst wide open with the shocking arrest of 72-year-old Joseph James DeAngelo, a former police officer. But no one was more stunned than the people closest to him: his family.

Red, White & Royal Blue by Casey McQuiston – First Son Alex Claremont-Diaz is the closest thing to a prince this side of the Atlantic. With his intrepid sister and the Veep’s genius granddaughter, they’re the White House Trio, a beautiful millennial marketing strategy for his mother, President Ellen Claremont.

When We Believed in Mermaids by Barbara O’Neal – Josie Bianci was killed years ago on a train during a terrorist attack. Gone forever. It’s what her sister, Kit, an ER doctor in Santa Cruz, has always believed. Yet all it takes is a few heart-wrenching seconds to upend Kit’s world.

READ THIS NEXT  The Sun Down Motel by Simone St. James

Night by Elie Wiesel– Night is Elie Wiesel’s masterpiece, a candid, horrific, and deeply poignant autobiographical account of his survival as a teenager in the Nazi death camps.

Right now, I’m reading What Did She Do?, Zoon Garden, and How to Be an Anti-Racist.

This Eternity of Masks and Shadows by Karsten Knight (Giveaway!)